The Masks Series includes at least 12 prints at the size 75 x 100 cm, a catalogue at the A4 size promoting masks as a fashion item for the face, as well as a demonstration of an installation of the materials, which the masks are made of. On the photographs you see one and the same face staring forward. The portrait is not characterised by the face itself, but by the mask hiding the face. The masks are made of different materials – biological such as flowers, some food items (ham, bread, sugar, egg), parts of animals such as feathers or hairs, artificial man-made subjects of a daily use (watches, cake moulds, spectacles, banknotes etc.). To use these in order to create a mask is, true, not a traditional way, however e.g. the tin cake moulds somewhat resemble a real armour of the medieval knights. On the other hand, some materials used are really remote to the idea of the mask one puts on the human face. For instance, the collection of old watches belonging once to my family ancestors is put connected together in order to cover the whole face and in fact is creating an impression of the monster, into which face an unstoppable flow of time has been engraved. Even though it is nothing else than a bit odd cover for a head which creation follows rather formal principles of a mask-building, the various materials used in their making demand a different interpretation. Some really work as a kind of an armour protecting a fragile face (like the cake forms), the other rather disclose a face in all its cruelty (like the ham), evoking a man whose face has been burned with the inner layer of the skin exposed. Still some other masks emphasise a fragility of the face, like the one made of the feathers, which only deepens an impression of the human vulnerability. Mere covering up the face with the expression of the eyes unchanged evokes manifold and strong impression. Which reminds me of an old truth that I dare modify a bit – not the clothes maketh the man, but the masks… And that is even stronger a statement than that one about en eye as a window to the soul. I am interested in the mask as something that more or less figuratively belongs to our everyday life. It is some kind of a weapon used in order to defend, protect, deter, but also to lure, to increase an attraction, to amuse, to emphasiseemotions and so on. A catalogue titled Masks – The 2005 Collection was inspired by standard brochures and leaflets promoting the cosmetics items that „definitely“ rejuvenate, improve or possibly change our face completely. The catalogue contains information about the price and the material of each particular model. In addition to the mentioned catalogue, the complete installation includes the samples of materials, which the masks are made of.

In Latin Mascus-a disguise Make-up of the face or the whole body, adjusting the imitation of the human face or a mythical being appears since the pre-historic times in all cultures. The masks were usually made of wood, bark, clay, metal and other stuff (i.e. the stone as a part of an architecture). Facial make-up (as well as the jewellery) in the prehistoric times and antiquity was supposed to protect against demons and only later attained an aesthetic meaning. In the Roman times women made up not only cheeks, eye-lids and eye-brows and dyed their hair, but also highlighted the veins visible through the skin. A mask works as a tool of the witchcraft, its bearer is identified with the powers and qualities of the ghost or animal which is depicted by the mask. As such masks therefore became a part of the rituals and cult dances, also reflected the primary notion of the world, explanation of its natural laws and human efforts to master them by i.e. the cults of their ancestors, by the hunters’ tricks (as the cave painting depicting a hunter in Trios Feres’ Cave proves, as well as stag skulls put on the head etc). The masks have developed into many types such as the cult ones (the mask hanging on the pole depicted Dionysus), the protective masks (gorgoneion), the military masks and also theatrical ones, the death masks (relating to the cult of the dead) and finally disgraceful masks applied to the convicts. The masks played its role even in the medieval times (the carnival masks, masks on the vaults, the construction elements, misericordia, in the book ornaments); back then they derived from reality and imagination as well as from the antiquity and oriental influences. In the renaissances and baroque time the perception of the masks was revived by their appearance in the crafts such as helmets in the shape of the bird head (i.e. the eagle head); in the architecture the maskaron found its place in addition to the mentioned gorgoneion. Since the sixteen hundreds onwards a female mask has become a fashion accessory as a disguise (P. Longhi, Tiepolo). In the modern arts the masks were often related with the theme of a disguise, namely in the socially critical trends (such as the politically oriented graphics,P.Picasso,E.Barlach,J.Ensor). 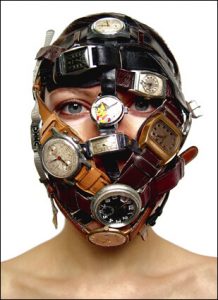 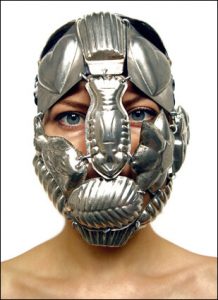 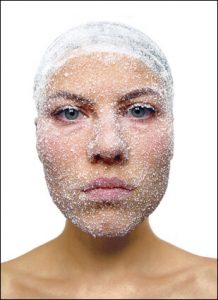 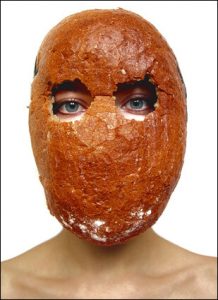 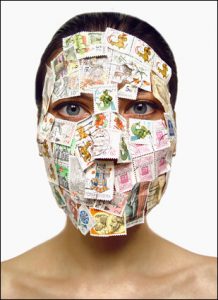 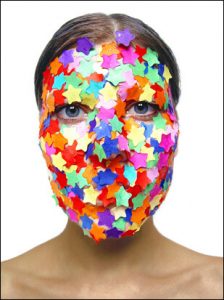