How do we present our personalities and lives in public? Do we behave differently online and in the “real” world? And what exactly is the “real” world? Our contributions or comments on Facebook are also read by “real” people after all.
The Edita’s “Facebook“ project examines the phenomenon of this medium and self-presentation. What exactly our profile tells about us? We mostly share only positive feelings or successes, photos which are either funny or sexy, we tend to create our better “avatar”. It is not about critics however, it is rather a social study; Edita is also an active Facebook user after all. She has painted these canvases according to real photos and chats on Facebook, thus bringing them back to the “real” world. And some reactions have been rather surprising. Some asked to change their username, others were pleased by becoming a part of this artwork.
Edita Pattová (*1982, Prague) graduated from FAVU at VUT Brno (department of Jana Preková) and was awarded by scholarships at the School of Fine Art, University of Leeds, and FAMU (Film and TV School, Academy of Performing Arts), Prague. She received 4th prize at IXth International Biennale of Contemporary Art in Florence (2013), at present she exhibits her drawings in photographs at Osten Biennial in Skopje. She was nominated twice for the “Prize of Critics” in Prague (2008, 2013), the “ESSL Art Award” in Vienna and the “Sovereign Art Prize” in London (2011). She lives and works in Prague. www.e-art.cz 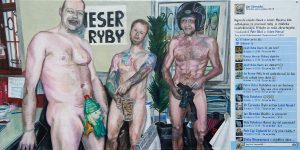 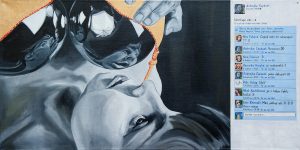 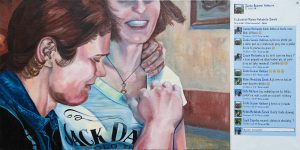 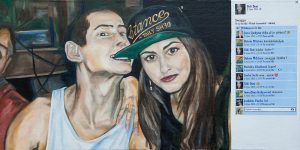 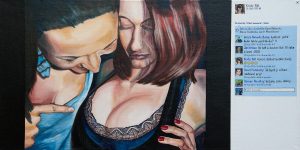 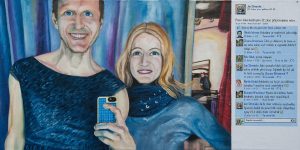