The photographs of Pavel Hokynek deal almost exclusively with people in their own surroundings – a big city, its streets, its adjacent areas, places of unpredictable meetings and situations. Hokynek’s subjects are immersed in the city, and their environment seems to be decorated by colourful patches of transforming reality which refer to abstract areas, and flows of light and energy. The fluidity of these photographs provide power to the space it inhabits, while isolating its subjects from the surrounding reality, and closing in on their solitude. His method is intuitively artistic. He manipulates his images by bleaching with various solutions in a darkroom. Hokynek refers to this process as partial liquidation. His interventions may evoke even some religious radiance in spaces and characters, while in other photographs, these may associate freely with dirtiness or dinginess of city corners. With the exception of photographs made from standard film negatives, which are interpreted or modified during the process of development, the exposition also includes the photographer’s eccentric collage-like prints made by using text fragments from old copies of internet news. This collection of works will show viewers of his slightly deranged, yet fascinating world, with media-like fabrication of reality and the ephemerality of on-line news. (by Jakub Hauser)
Pavel Hokynek (1943) has engaged in artistic and portrait photography since the early seventies; starting from 1997, he began working with original authorial manipulation of photographic pictures. His photographs depict particular inconspicuous corners and peripheral areas of Prague and London; two cities which represent the subjects of his long-lasting interest. www.pavelhokynek.cz 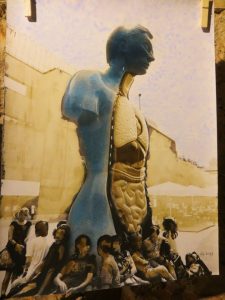 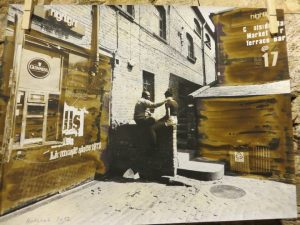 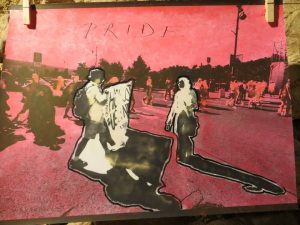