Silke Koch, influenced by her childhood in East Germany in the 1970s, creates her own fantastic visions of space objects, consisting of recognisable items of that time. Salt shakers, egg cups, thermos, various vases and selected common kitchen utensils are thus given a new form and meaning in the form of absurd objects. Carefully composed constellations of surfaces, materials and colours refer to the design of the nearby past and a vision of a possible future within the context of the constant conquest of the universe. The title of the series refers to the cult novel Gravity’s Rainbow by Thomas Pynchon, one of America’s deepest and most inventive social probes during the Cold War. Silke Koch, growing up at this time, questions our everyday fantasies, our space wonder, phallic models – utopias that are constantly ascending, but cannot be grasped. As quoted by legendary composer and musician, Sun Ra: “Space is the place.”
Series of photographs as well as some objects themselves will be part of the installation.
Silke Koch (*1964), a German conceptual artist, graduated from the Hochschule für Grafik und Buchkunst in Leipzig and the Universität der Künste in Berlin. She has exhibited both in Europe and in the US. www.silkekoch.de 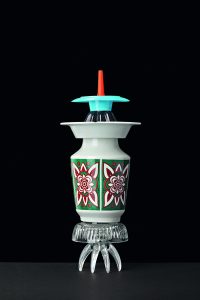 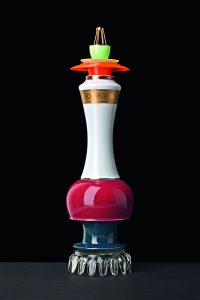 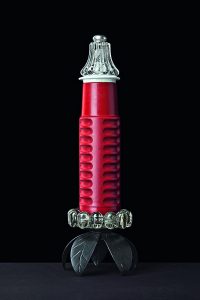