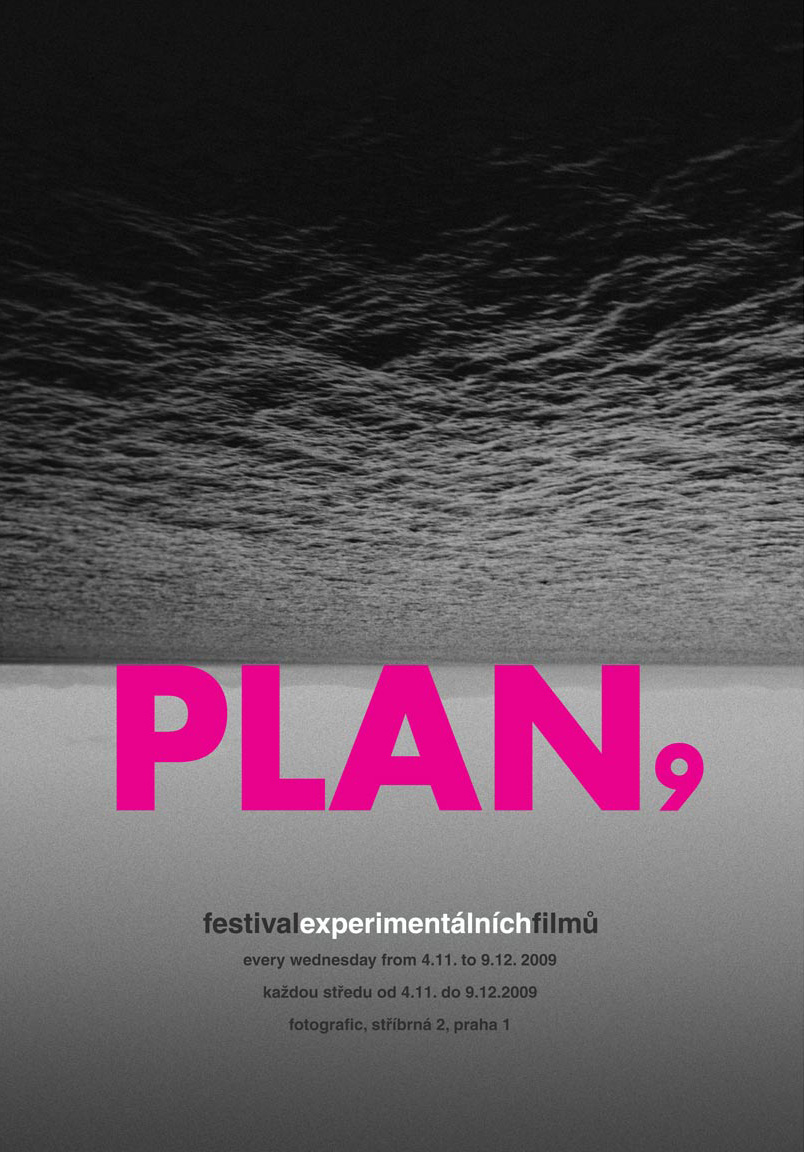 In its 4th year, the festival of experimental films PLAN 9 presents the newest experimental films from all over the world. During six Wednesday nights in November and December, the PLAN 9 will present profiles of selected artists and filmmakers and also show selections of short experimental films, videos and installations during the compilation evenings. Plan 9 is designed for a wide audience. Majority of international films included in the festival will be presented to the Czech audience to for the first time.

4/11/09 19:00 EXPERIMENTAL SHORTS I.
.The first evening of the Experimental Shorts offers selection of fresh experimental films that hit the screens of festival cinemas in the last year and were shown in art galleries worldwide. Vertiginous camera movement through photographic plans of disappearing city of Shanghai in the French project of Zhenchen Liu; playful capturing of the staleness of mountains in time laps; counterpoint between the image and sound in the tango lessons for seniors; returning to the structural experiments; the reminiscence of codes from the classical era; the unexpected crow and other films by international artists.

11/11/09 19:00 WEIRD FILMS
The second evening covers the selection of shorts which stand aside of the classic experimental film. The connection doesn’t lie in the form or similarity in approach toward the film or video media; it lies in the impact the films have on their audience. The constant evocation of astonishment; crossing and swapping between expectable and unacceptable; oscillating between situational gag, exaltation and disappointment; starting with astonishment and vertigo and ending in slightly uneasy discomfort. The second evening designed for shock-proof audience not only experiments with film forms; more importantly it exercises the resilience of the viewer’s reception.

18/11/09 19:00 VILÉM NOVÁK & FAVU
The third evening presents conceptual films, video art installations, and multimedia essays. The selection of works of students of Faculty of Fine Arts, Brno University of Technology. The evening will be presented by the multimedia artist Vilda Novák.

25/11/09 19:00 PROFILE MICHAL PĚCHOUČEK
The laureate of Jindrich Chalupecky Award and the remarkable figure of the Czech film and video art scene will present his work from the 90’s until today. It is characterized by his free movement across the media and forms, his specific attitude of the dilettante filmmaker and his refusal to accept image fixed in time. Pechoucek is fascinated by a simple, basic story, heading from a concept to the concreteness. Returning to his own past, he reopens the esthetics of the 80’s and our collective visual memory. This includes the fictional worlds of naive astonishment, details and cyclic drifting in the familiar and unknown fields of the new media. The artist will be present at the performance.

09/12/09 19:00 PROFIL – PROFILE – JEAN-GABRIEL PÉRIOT
Périot’s films introduce the forbidden instruments of experimental film in several ways. Consistent work with the political stand, gradation, punch line and light self-irony drives his film out of the puristically protected boundaries. He achieves the pixilated film image using the approach opposite to classic methods – by compiling thousands of photographs which put together in extremely speeded up connections create a illusion of objects drifting in space (Dies Irai, 2005) or in time (200.000 Phantoms, 2007). His films awarded at tens of international festivals or contemporary art exhibitions will be introduced by the author in a special interview.

*some films are only in English, without Czech subtitles